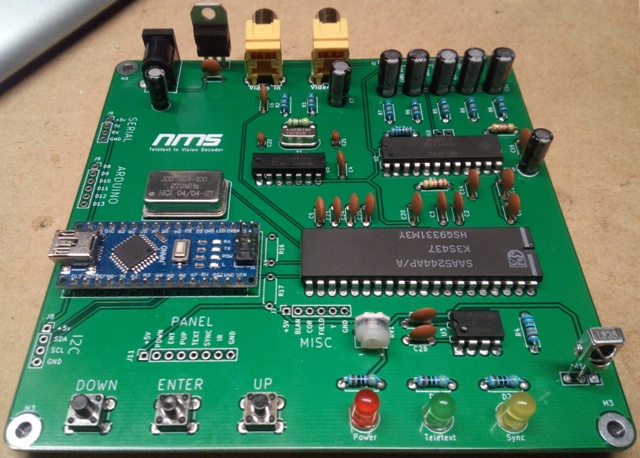 What does it do?

As the name suggests, this device takes a teletext signal in it's raw VBI form, decodes it, and outputs it to a display such as a TV, monitor or projector. However, as we will discuss later, it can also be put to alternative uses.

Why would I want one?

While this device was mainly built for fun, it does have some legitimate uses, for example in many European countries where commercial teletext is still broadcast. It could be used with older televisions or monitors which don't have teletext decoders built-in. It can also be connected to most projectors, which could be useful for demonstrations, art, etc. Finally, if you've no interest in teletext, it can be used as a simple 'video card', as discussed below.

How does it work?

The board uses an SAA5244 decoder IC to do all the actual decoding. It is controlled by an Arduino Nano, and it's RGB output is fed into a CXA1645 PAL encoder chip to generate the CVBS and S-Video outputs.

The board is designed to work stand-alone if required. The three buttons on the board are all that's required to select a page to view. However, it will be made much easier to operate by pairing an IR remote; this can be accomplished through the on-board setup menu, without the need to write any code.

As mentioned above, the board can be used stand-alone without any additional components if required. It has an IR reciever so it can be controlled by most IR remotes. It has Composite, S-Video and RGB outputs. I2C, serial and some unused Arduino pins are broken out on the side of the board, they can be used in custom input devices or other applications. There are also some syncing signals broken out, such as blanking signal for SCART overlay and an odd/even field indictator pin.

If you don't want to use the board to decode teletext, you might like to use it as a mode 7 style video card. It's possible to write characters directly to the screen by disabling the acquisition circuits. The board can then be used as a simple pattern generator or text display.

Where can I buy one, and what are the options?

You can buy an In-Vision Decoder in kit form, or for a bit extra I'll assemble and test it for you.

Now for sale on eBay! See here for a pre-assembled board or contact me if you'd like to reserve a kit when they become available.

If you'd like me to add a few more bits for you, for example a power supply, IR remote, case etc, or add extra features for you, give me a shout and I'll let you know if it can be accomodated. Do note that extra hardware means extra costs, but programming is generally free where the change will benefit everyone.