A much more informative and interesting page for the VBIT-Pi is available here! 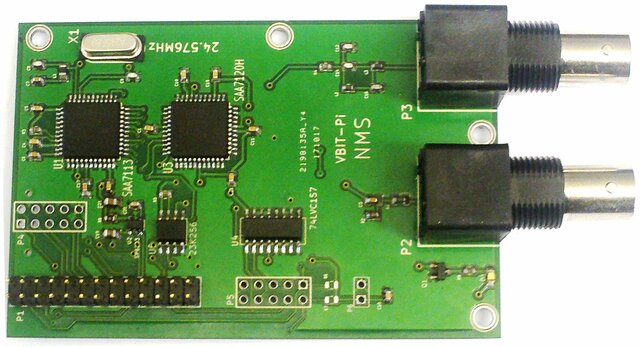 The VBIT-Pi is a teletext inserter add-on board for the Raspberry Pi. Originally designed by Peter Kwan, it uses the teletext generating abilites of the SAA7121 IC to insert a proper rasied-cosine teletext signal on any stable composite PAL video signal, for example the output of a DVD Player or CCTV Camera. The SAA7121 is also capable of Wide Screen Signaling for controlling TVs and can be used to adjust the brightness, contrast, sync level, black level and other properties of a video signal. The SAA7113 IC is used to convert the analogue video signal into an 8 bit digital signal that the SAA7121 can use, but it can also be used to adjust various properties of the video signal. The version 2 PCB pictured above is connected to a Raspberry Pi by a ribbon cable, which works but can be inconvienient, so I designed the V3 board. It removes some of the old AVR components and replaces the BNC connectors with phono jacks, as well as sitting on top of the Raspberry Pi 3 as a 'HAT', removing the need for a ribbon cable.

Software for all VBIT-Pi boards is available on Github here

That's another 3 boards built - still some testing to do, but I'm hoping to have them up on Ebay on Tuesday. Back soon with more details!

I think this will be the last batch for a while: I've run out of ICs, UTSOURCE only sent 8 when I ordered 10, and it'll take a while to sort out as they're on holidays at the moment. I've ordered more, but it usually takes a few weeks for them to arrive. I have two PCBs, if someone wants them to build their own boards, let me know. You can email me at "nathanmediaproductions@gmail.com".

The Worldwide population of VBIT 3s has gone up to 5! 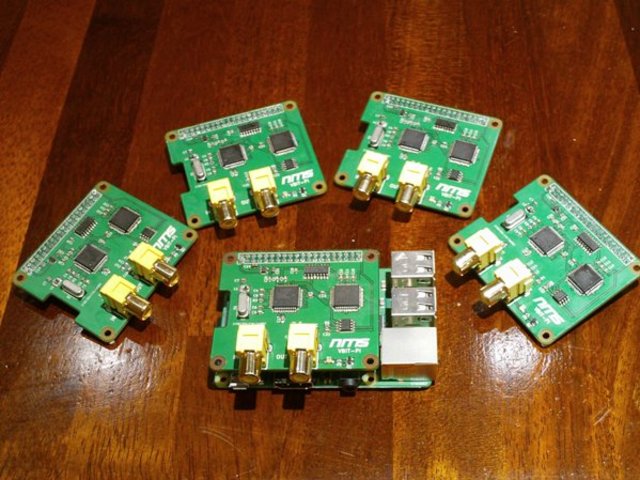 My prototype worked perfectly, so I went ahead and put 4 more together. They'll be going on sale soon.

I had problems with two of the boards initially. One was showing a bad video signal and the other didn't work at all, not showing up in i2cdetect. The first one had a tiny solder bridge shorting out the i2c bus. The other seems to have a problem with the SAA7113 IC, so will require some more work. It won't be going on sale yet.

Today the V3 PCBs arrived! I think they look great, but you can judge for yourself.

Now I just need to order some parts from Farnell and then we'll have a prototype to test!

In other news, I've added a new script to control WSS on the VBIT-Pi. It's available along with all the other code on Github under 'vbit-pi'.

PCBs and ICs for V3 are on their way, so there should be a working prototype sometime soon, hopefully in the next week or so. I'll have to do some rigorous testing before any go on sale, however, for reasons which should be obvious.

I actually have yet to purchase the Raspberry Pi 3, even though I'll obviously need one for testing! I'm also thinking about getting an oscilloscope in the near future to check all the video settings. I've noticed that some TVs aren't showing the output in colour? Of course, it might just be the input I'm using from a Freeview box, which has already proved unreliable.

Sidenote: While many people think that it's stupid to use an obselete product in a new design, I decided to keep using the old SP6205 3.3v regulator, simply because I'd already ordered 20 of them and I don't really expect to build any more than 10. Unless demand is huge, of course, which is somewhat unlikely.

The new V3 is now in the final stages of design. Just some checking to be done and it will be ready to begin manufacture. 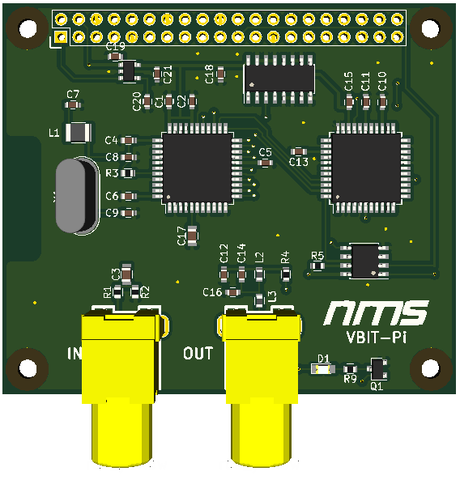 As you can see, the new board is designed to sit on top of the Raspberry Pi as a 'HAT', so removing the need for an inconvenient and untidy Ribbon cable. It also has RCA sockets instead of the old BNCs, making it smaller, lighter and more user-friendly.