Bringing Connectivity to the Garage: Part One

Our garage has an attic-type (think sloped, relatively low ceiling) upstairs, which is where my father and I do most of our technical activities. Now until Summer 2020, it was mostly under his control; but after a fire caused enough damage to warrant something of a re-model, I was granted a corner to myself, complete with an L-shaped work bench. Perhaps this shall be described more in depth in other articles, but in this one I want to share how I got network and video connectivity from my Communications Area (my better-sounding name for "rack-in-the-attic") to my new workbench. 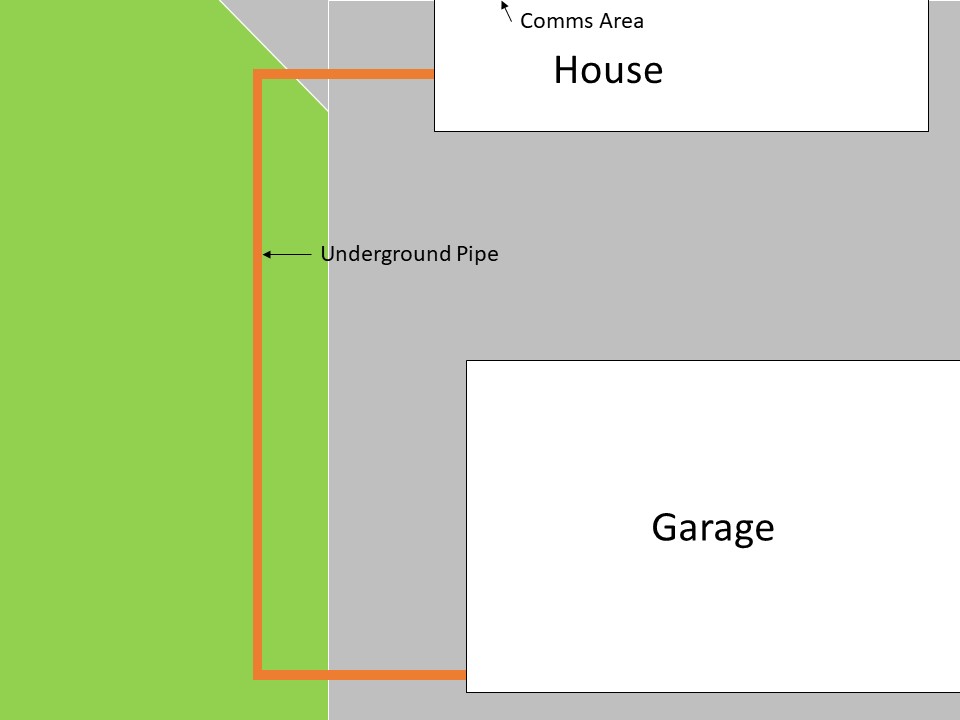 A rough diagram to show where the house, garage and underground duct are in relation to each other. The risers from the ground to the attics are disguised as downpipes.

The garage and house are seperated from each-other by a few meters of concrete. With ugly overhead cables immediately ruled out, and any kind of wireless link deemed too unstable for networking, and too complicated (and wasteful) for the analogue AV links, the only remaining option was to run the cables undergorund. This, however, was not without issues; while an underground duct existed, the existing cables would need to be cut in order to gain access - and then there was the matter of a huge plug of expanding foam in each end. Before the garage fire, cutting the cables would have been unheard of; they powered various outdoor lights and an intercom system which could not be done without. But with the fire having damaged them such that they needed replacing anyway, I could get away with stripping all that old cabling out and running fresh new connections.

With the original cables removed and the duct ends opened, another issue became clear; The pipe was full of water. Therefore, I decided to run a thick length of flexible conduit inside the existing duct, which would not only keep my new data cables safe and a bit dry-er, but also keep them seperate from the mains cables. (incidentally, as of 2021 when I'm writing this, those mains cables have not been re-energised. It's looking incresingly unlikely that they ever will.) And so the time had come to decide what cables I would run to make the connections. 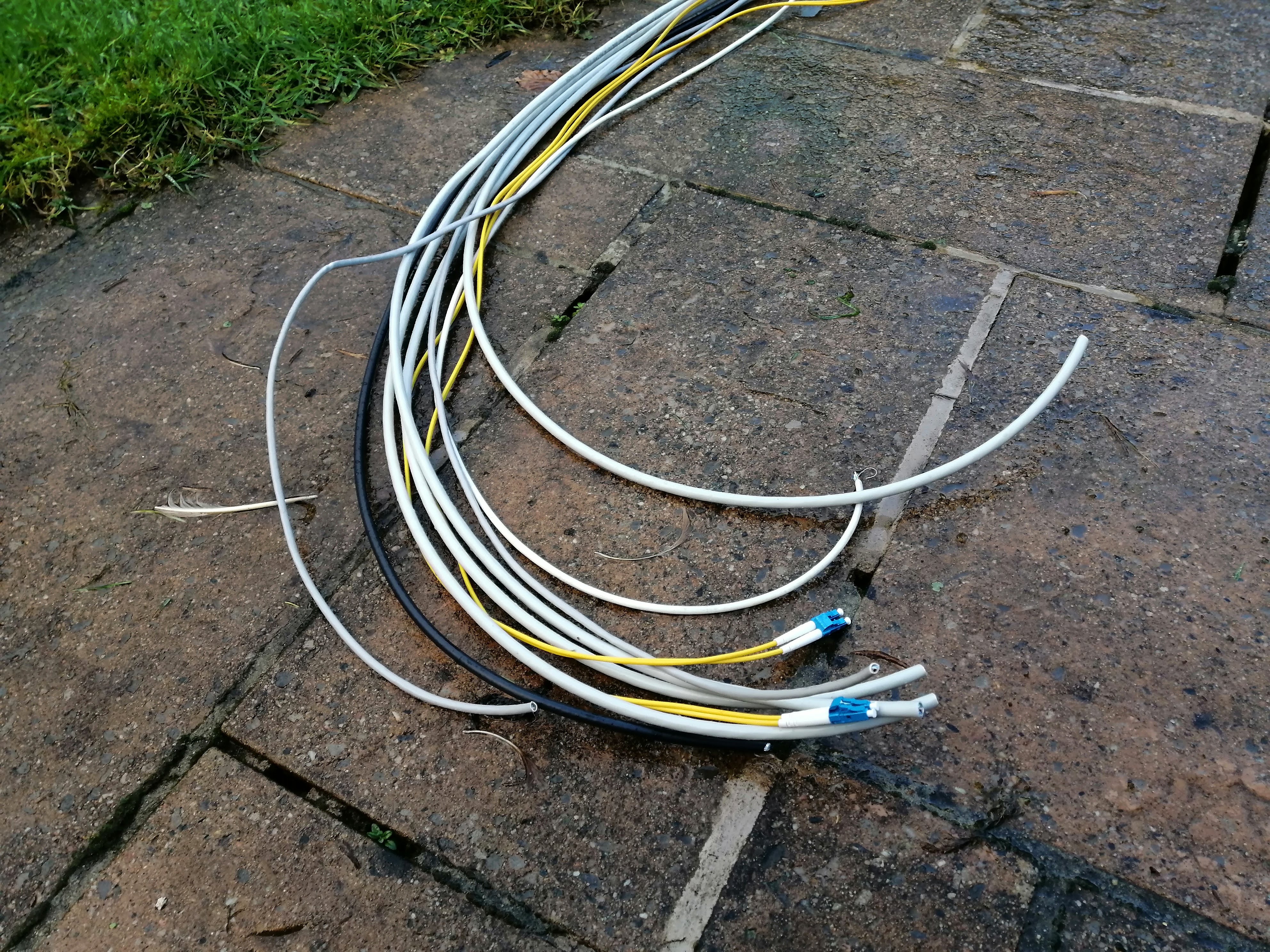 The bunch of cables, just before getting bagged up to be pulled through the conduit

I was fairly certain that this wiring job was going to be a Massive Pain, no matter what way I went about it, and as such I wouldn't want to repeat it any time in the near future. I therfore decided to over-spec the connections as much as financially, and sensibly, possible so as to avoid ever needing to replace this installation in my lifetime. For the network connectivity, I chose two single-mode pre-terminated fibre optic cables. For now, one of these would be enough to carry a gigabit connection from a network switch in the Comms Area to a smaller switch in the garage. This would be more than adequate, and fairly cheap too - I think the most expensive part ended up being the SFP modules. The fibres also gave the option of future upgradeability - with a new pair of SFP modules, they could easily carry a 10G connection, probably more, and the second one can either provide redundancy, clustering, or carry a completely independent signal, like uncompressed 4K video if I felt like it. Then I added four shielded Cat 6 cables. These are horrible by the way, too thick for normal RJ45 connectors, which means you have to get special plugs etc. They can obviously be used for networking as well, but their primary use is analogue video links; One cable can carry four independent video feeds, and at the moment one is configured to have 2 sends and 2 returns. They can also be used for analogue audio, with correct balancing. There's also a dedicated RG-6, to carry OTA TV signals, and possibly also other signals in future. Then came the "extra" stuff that I really just stuck in because I could; two Cat 5e cables remain unused, and a 12 core "alarm cable" has 4 of it's cores used for an intercom system. One of the Cat 5e cables is intended to carry POTS from the house to the garage, but this has been deliberately held off, since I hate answering the phone, and connecting it would remove my excuse of "not hearing it from the garage". 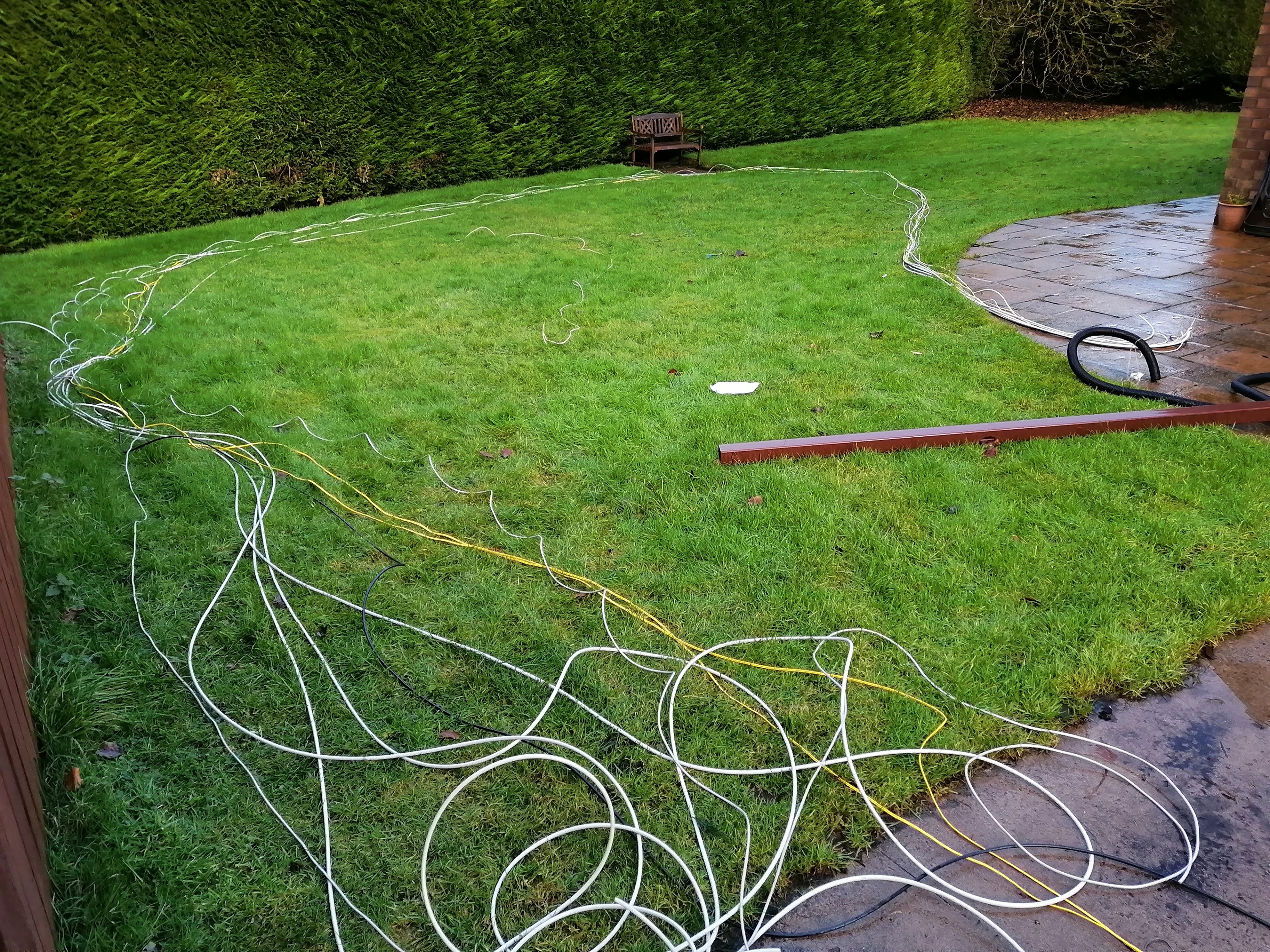 The cables laid out and cut to length 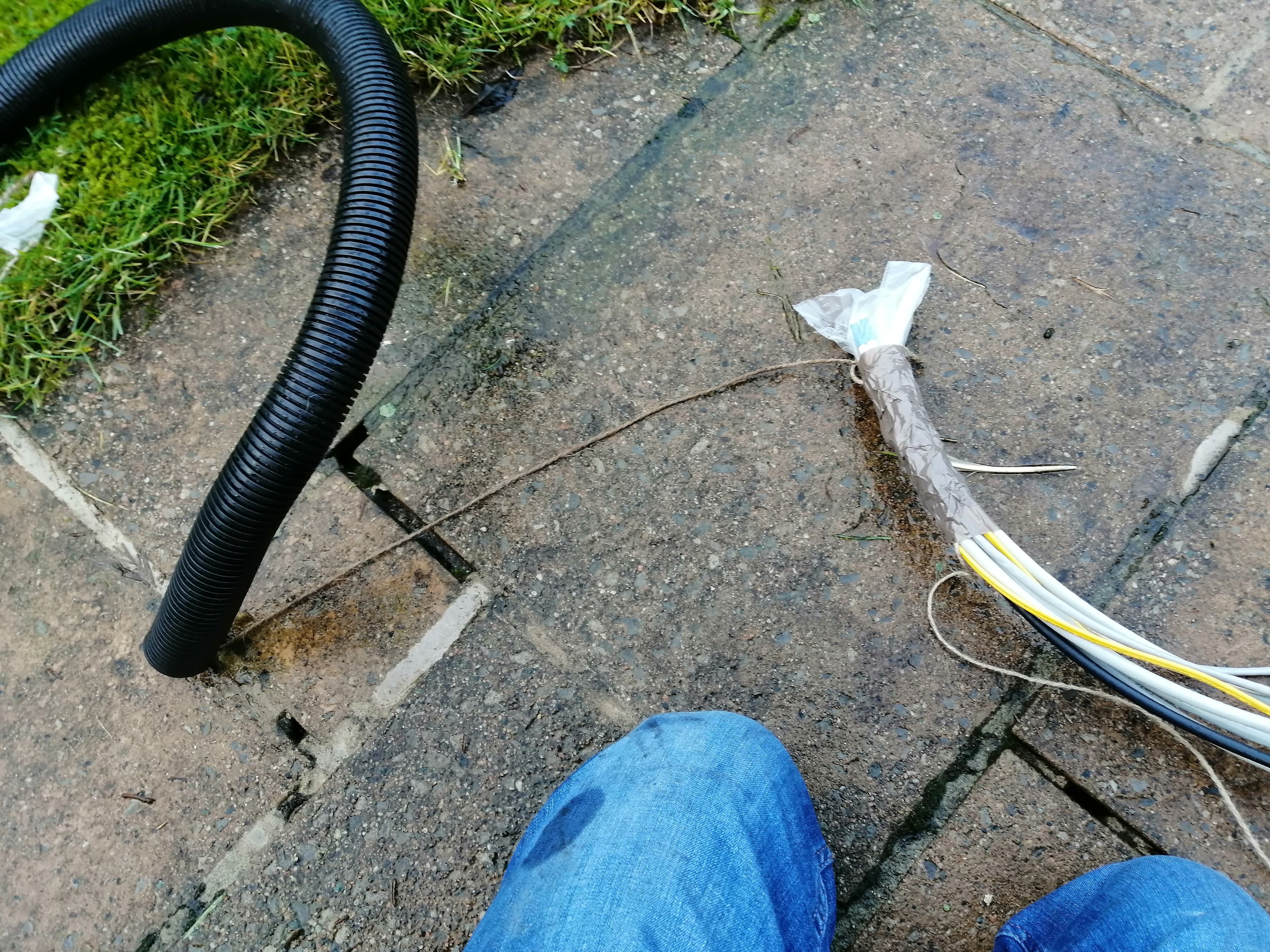 Bagged up and ready for the first pull attempt

I started pulling the cables through the duct on a Saturday morning, with a Plan of what way I would do it. I started by laying out the conduit, and cutting it roughly to length, and then using a vacuum cleaner to suck a piece of rope through it. Then I used one of the existing cables in the underground tube to pull the conduit through. Mistake #1, but all was going well so far. Then I measured out 35metres of each cable (and the two pairs of fibres) and stretched them across the garden. That done, it was time to tape one end altogether securely with the underground rope. This was where the problems started; Pulling the cables through the conduit was revealed to be extremely difficult around corners... Eventually the rope broke, with the cables less than halfway round the conduit. Various colourful phrases to describe the rope and conduit were issued at this point. I therefore pulled the cables back out, and sucked a new length of rope through, but unfortunately this had much the same result, with a broken end of rope suddenly appearing from the far end.

Determined not to let the cables and conduit get the better of me, I hatched a new plan; to this end, the flexible conduit was pulled back out of the underground tube and both tubes re-roped. Then I pulled the cables through the flexible conduit in the garden - as you've probably guessed, the plan is to pull cables and conduit an' all through the underground tube in one fell swoop. At least then the cables couldn't get stuck on the conduit's ribs going around a tight corner undergound. Despite becoming difficult on the corners, this went surprisingly well, and I was thrilled to see the conduit pulling out of the far end. Nearly there! 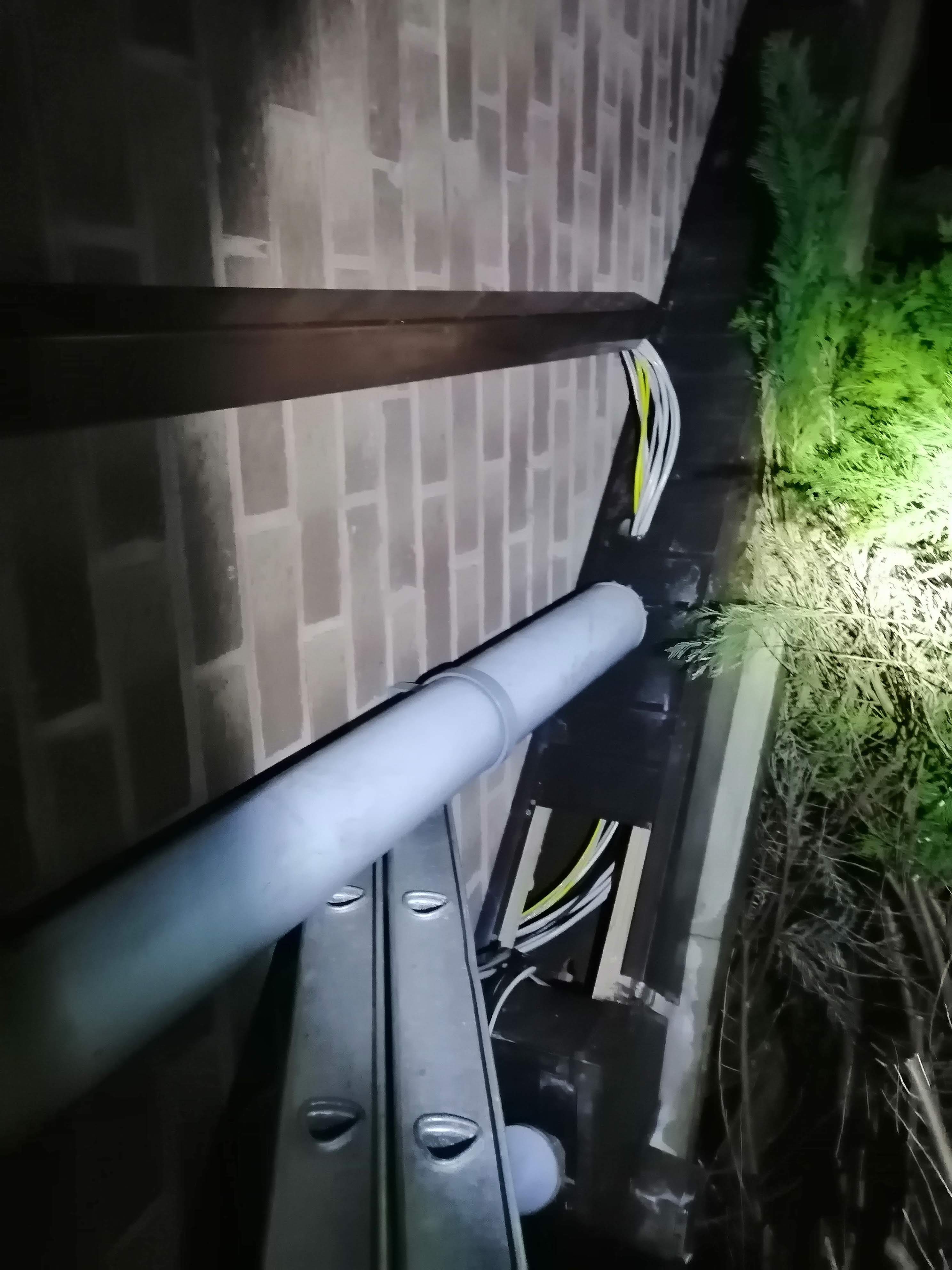 The only thing left to do, with regards to actually pulling the cables in anyway, was to pull the ends into the house and garage. This turned out to be more difficult than I'd thought; that particular corner of the attic in the house was occupied by Mum's Junk, which meant it was very awkward to get anywhere near the cables. Frankly it's a wonder I didn't end up falling through the ceiling lying across a bunch of cardboard boxes, but I managed it anyway. The garage side was slighly less complicated with regards to access, I could poke the cables into place through a hole opened in the soffit. 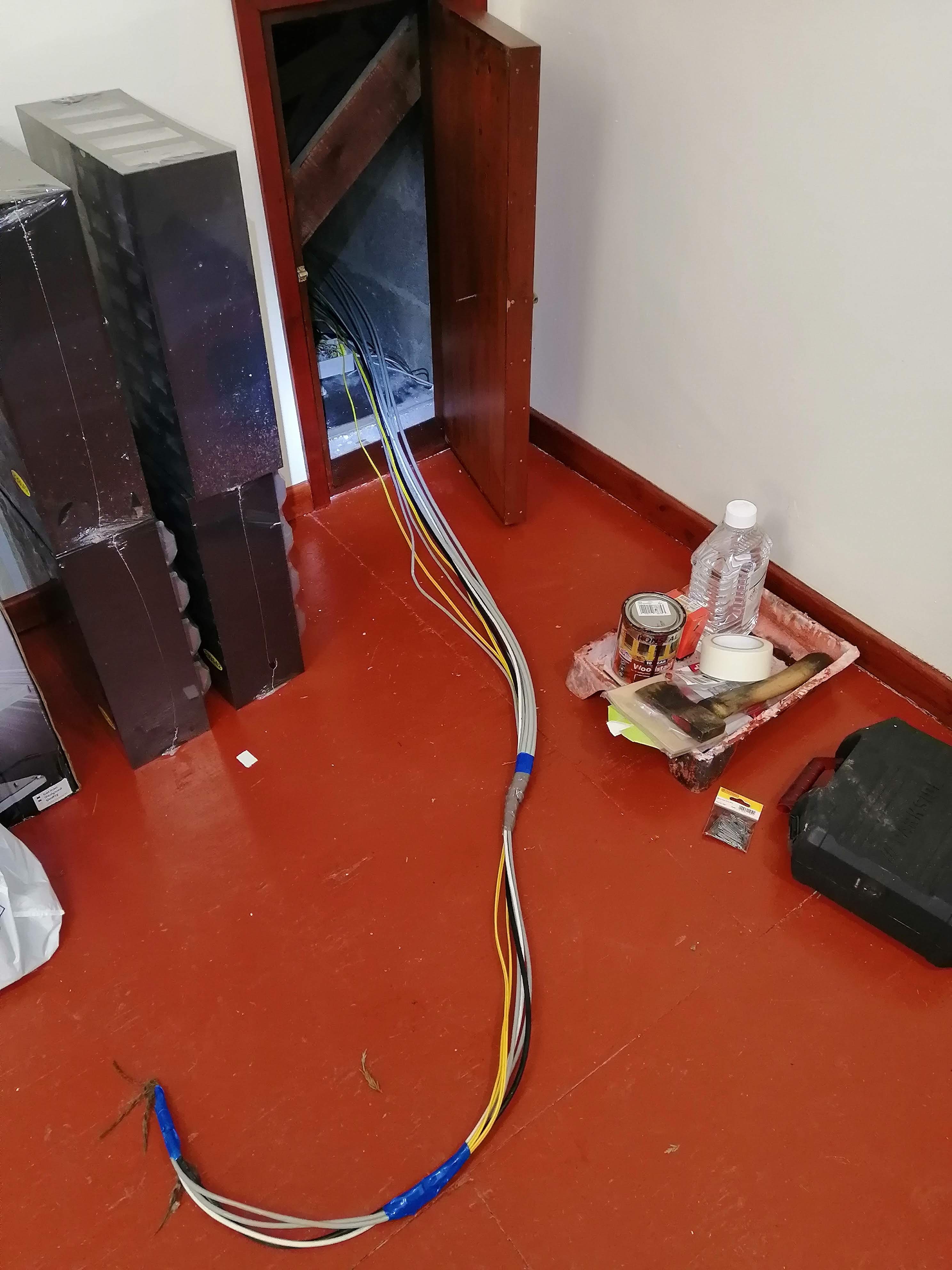 The triumphant moment I pulled the entire bunch into the garage, finally re-connecting the house and garage! You see here how I 'stepped' the cables, so that the main pulling strain was put on the coax and Cat5es, rather than the delicate fibres.

And that's the cables in! But what about connecting them up and using them now? What if I broke the fibre optics with all that pulling and bending? Find out in a maybe future article!