The system we're going to discuss was originally installed back in 2008, and it's quite clear that someone was keeping an eye on the wallet. Whilst the audio side has remained relatively unchanged, the video side of things was primitive, to say the least, even by 2008 standards. It consisted of a single consumer-grade camcorder bolted onto a pan/tilt mount, which fed it's pictures back to a domestic DVD recorder. This produced the "master" DVD, and if it failed there was no backup. This was the setup until probably around 2016, when the consumer grade camcorder was replaced by a PTZ CCTV camera - however the "analogue input to a domestic DVD recorder" remained unchanged, and the camera remained solitary. Eventually in 2018, a second camera and video mixer was added - whilst a big improvement on what was there, it still seems a bit ludicris that a full analogue setup was still in use in 2018, and through 2019.

However, a big change arrived in 2020, as a result of the Covid-19 pandemic - with church services suspended and only to be available online, it became clear that a major update was required. It was at this point we added a PC and video capture cards to allow the live online streaming - but still record services for DVDs.

With all this new kit installed, it seemed like the perfect opportunity to fix another long standing issue - the desk's location. Many churches have their recording systems on a gallery or in a seperate room; but our desk was stuck in the back corner of the church itself. This has several obvious disadvantages, probably the worst was that if we made much noise it would distract everyone around us. The other was a lack of room for expansion; some of our amplifiers, printers and other kit were in another room since we didn't have the space for them at the desk itself. As such, we secured permission to move the entire system onto the gallery. 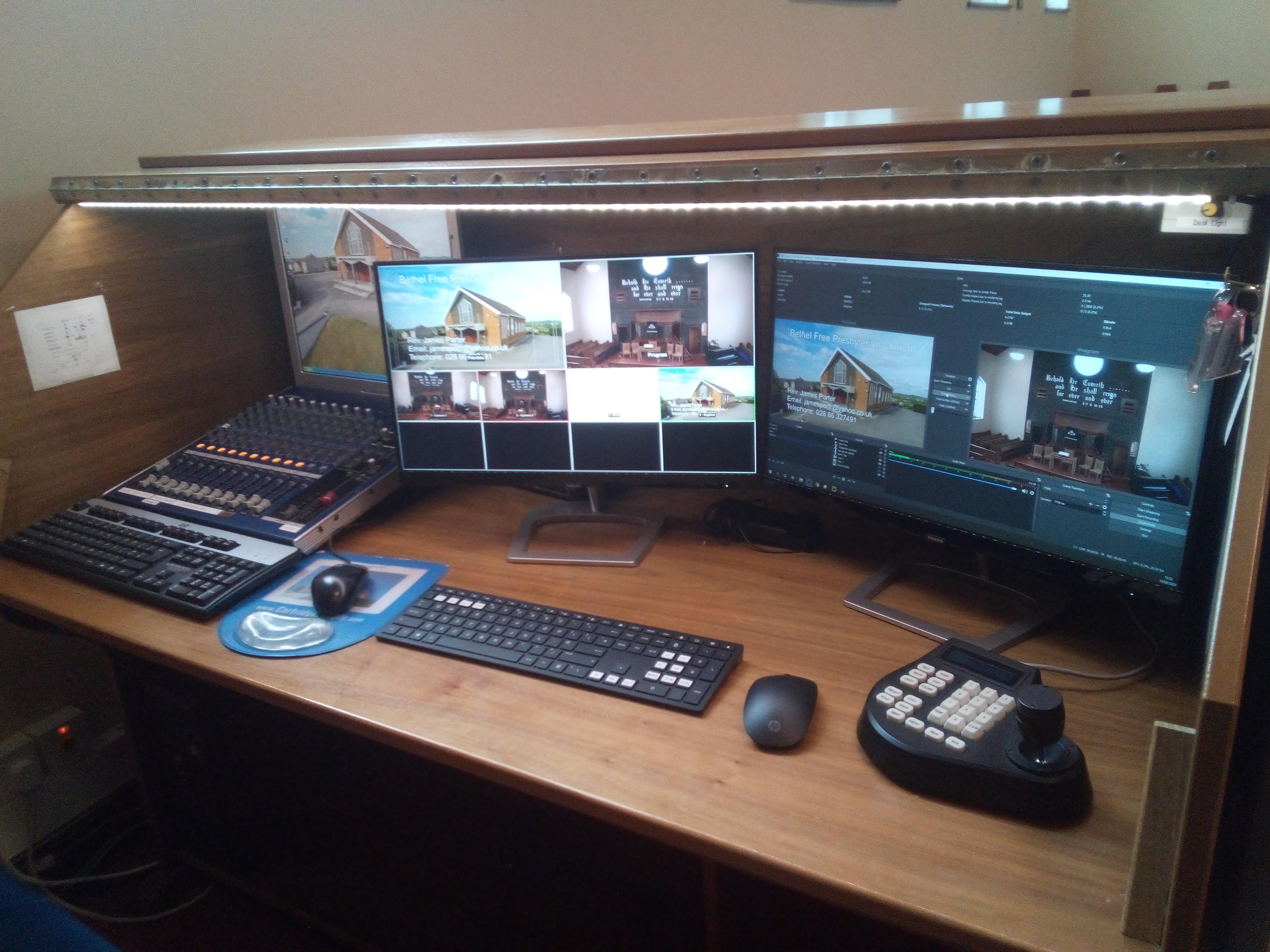 There was initially some resistance to this idea; There was a small possibility of some renovation work being done to the gallery in the upcoming years, and so it would have made sense to wait until this was completed before moving our kit up there; however, after asking a few questions we were informed that "there was no chance of work of any kind starting up there in the next five years". Satisfied with this response, we chose a new spot for our desk; This was essentially directly above and behind it's previous location. We had some good reasons for placing it here; Being at the very front of the gallery meant we could get a good view of proceedings, but over to the side so we were out of the way of anybody who happened to be sitting up there - it also meant that many of the cable runs to the existing desk, which in fact ran under the floor of the gallery into the kitchen below, could simply be pulled up and re-terminated, without any need to extend the cables. This in turn meant the only cables that needed lengthened were audio cables, which could be easily extended en masse with a pre-made audio snake.

There were some time limitations, to make life interesting; The system needed to be operational for the Prayer Meeting on Tuesday night, and obviously the main Sunday Services; this left us with 4 full days to get everything sorted. There was a lot to do in four days! One advantage though was that as the services were still online at this stage, we didn't need the PA amplifers running for those days - as such we started by moving them on the Friday before the Big Move Week.

The main amplifers were located in a cupboard in the kitchen - they received their audio feed from a sheilded cable poked through a hole in the wall, which then plugged directly into an auxiliary output from the mixer. Their outputs then went up into the ceiling above, otherwise known as the gallery's floor. Since the shielded input cable would no longer be required, we pulled it out completely, and then pulled the speaker cables back up through the ceiling from the gallery. This left plenty of excess length for us to work with. Rather than cut the excess length off, I elected to leave it coiled deep under the floor out of the way - just in case it would ever need moved again in 10 or 20 years! The amplifiers would now live in a purpose built cupboard on the gallery, just behind where the desk would go; We therefore installed a floor brush plate to allow the cables to come up through the floor into the cupboard, and into the amplifiers. Whilst proper sockets would be installed later, for now we ran an exension lead under the floor to power the amps, and also the CCTV DVR. 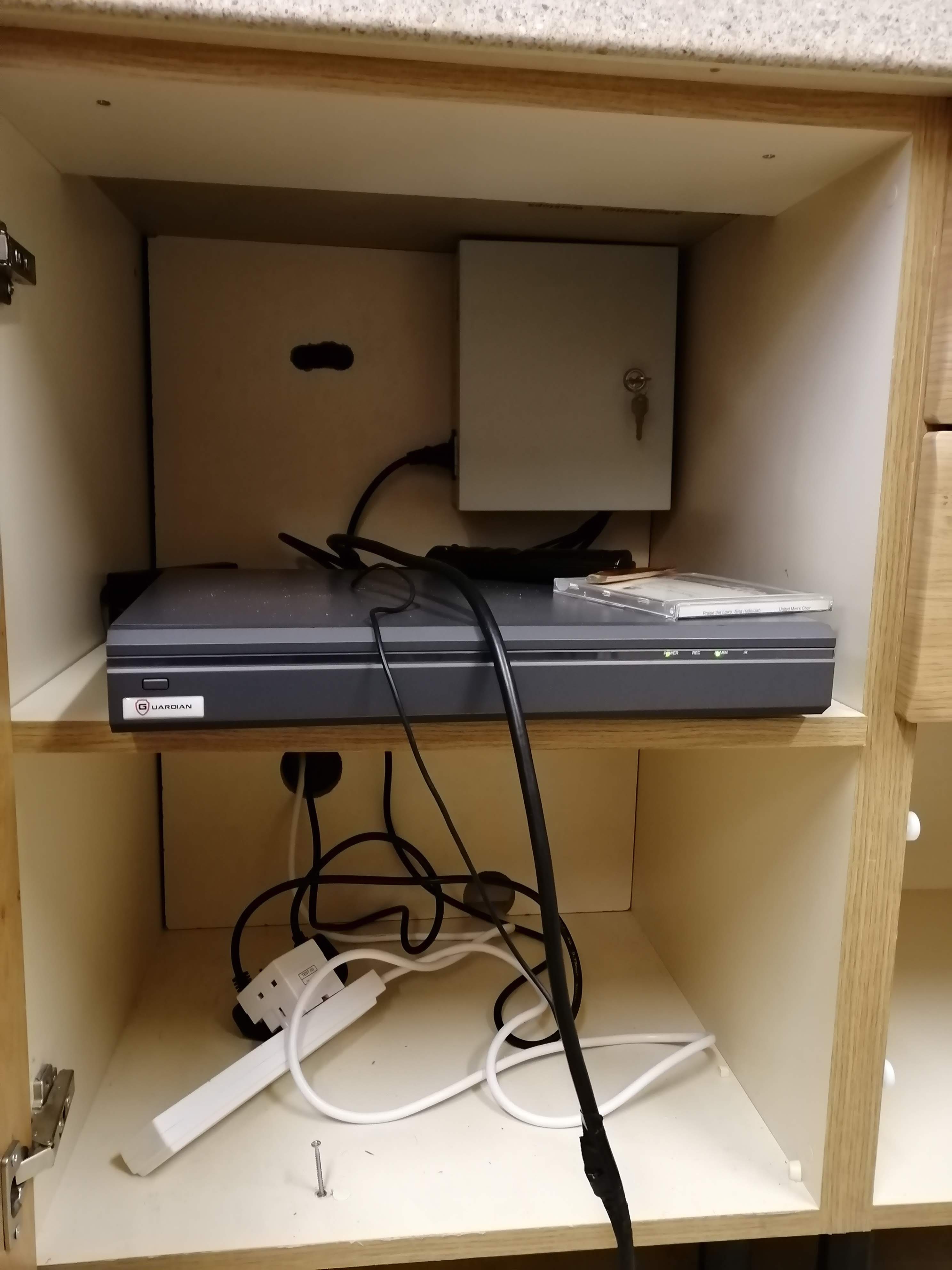 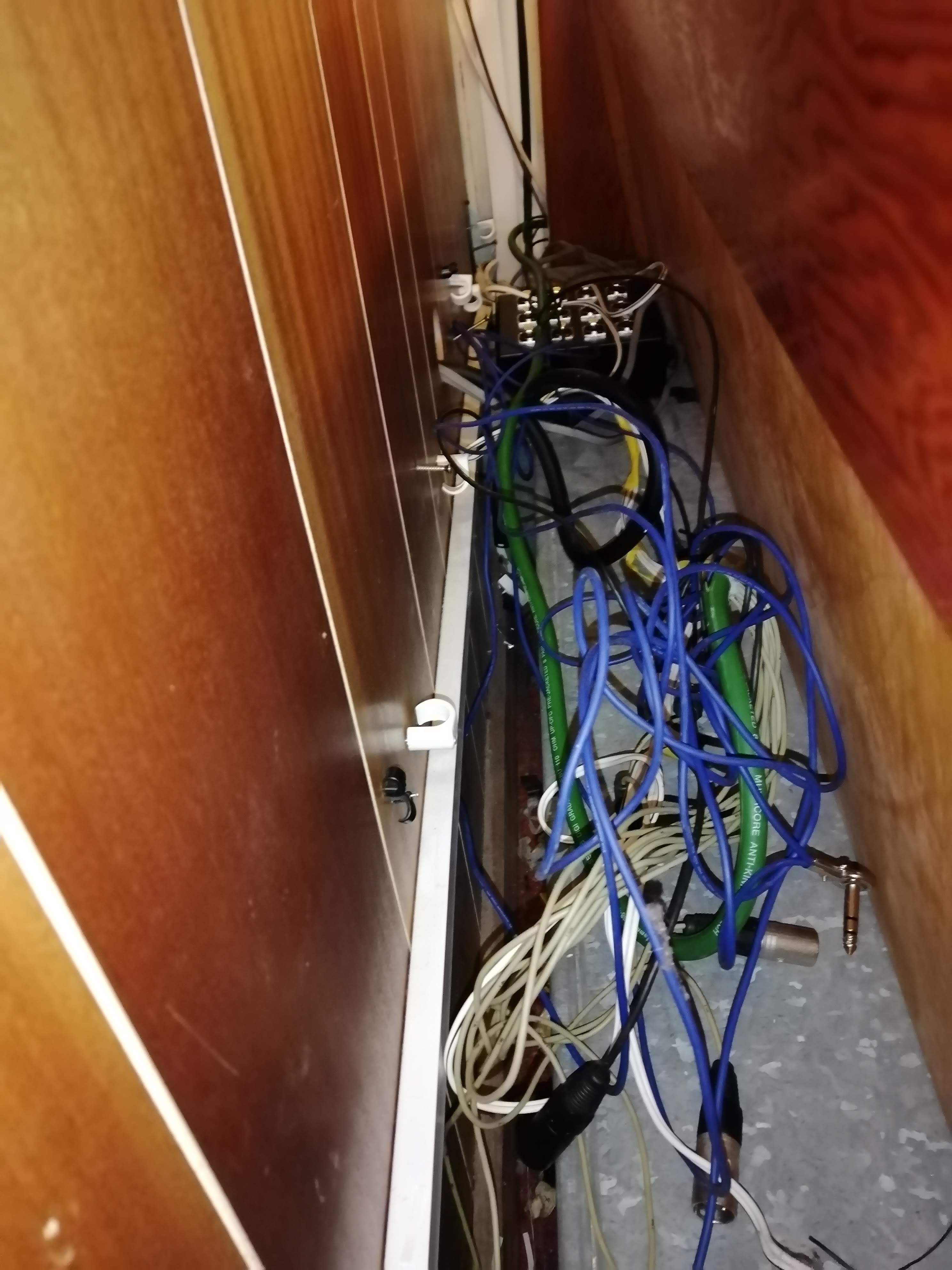 Audio cables behind the bench ready for ripping out 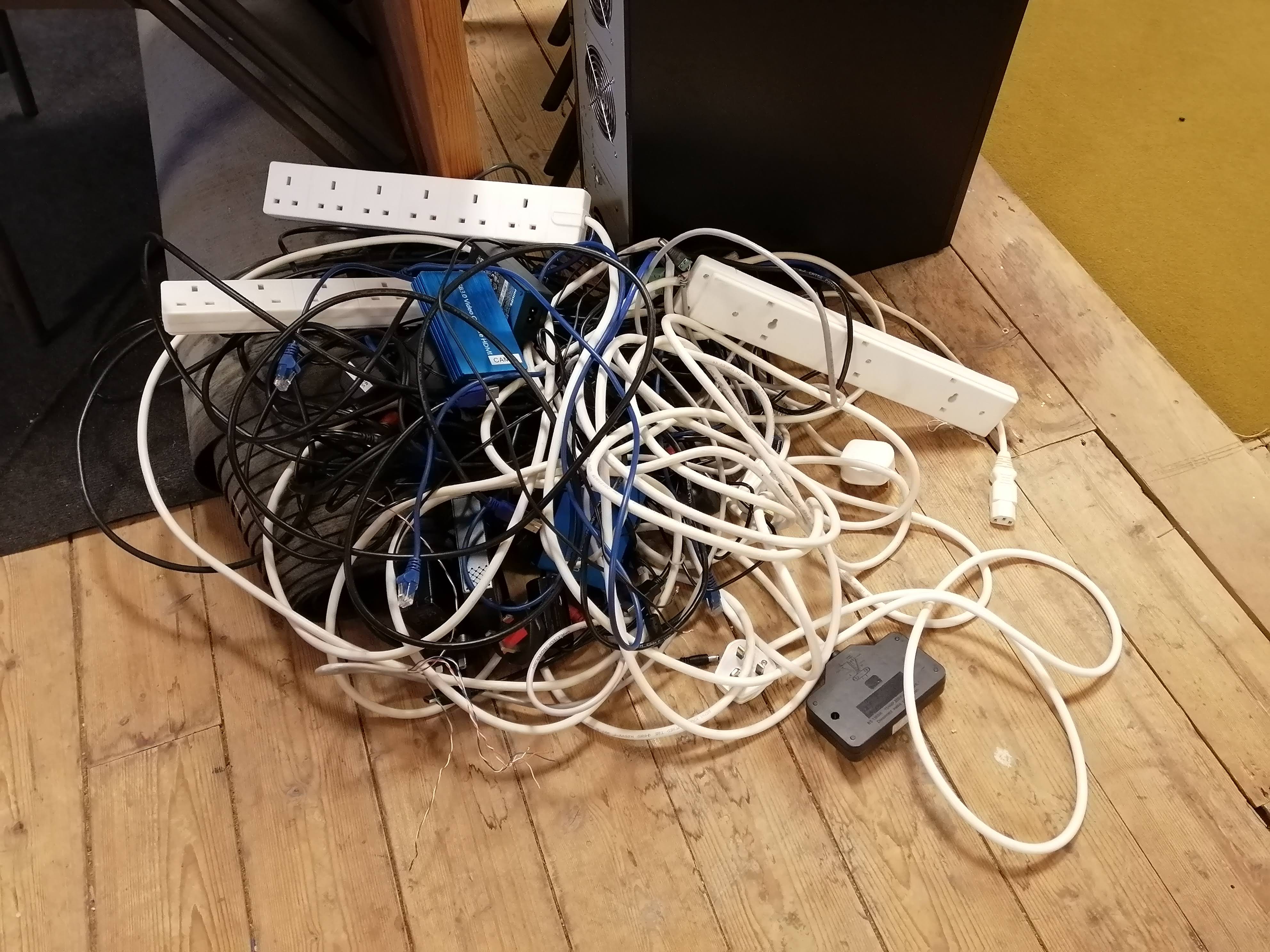 A mass of extension leads, video cables and converters we ripped out for reuse

Moving the desk and main kit itself began on the Tuesday night, directly after the Prayer Meeting had been recorded and uploaded. We started by completely disassembling everything - bringing all the monitors, mixers and miscellaneous equipment upstairs and out of the way. We then proceeded by pulling all the cables out of the desk and back up through the ceiling onto the gallery - we also installed a 16 way audio snake at this point. This terminates in a patch panel hidden behind the back row in the church, and left us future capacity to install more audio circuits if ever required. This left the desks themselves free and ready to be carted up the stairs.

The desks took some serious moving to get up the stairs! It took 3 of us to move them. With them now in place, it was essentially time to undo all the dismantling we'd done earlier. This basically involved re-terminating all the Cat5e cables, and re-installing all the monitors, PCs, and the sound kit. We worked late into the night to get everything sorted out, and tested. Much to our relief, everything more-or-less worked as expected! 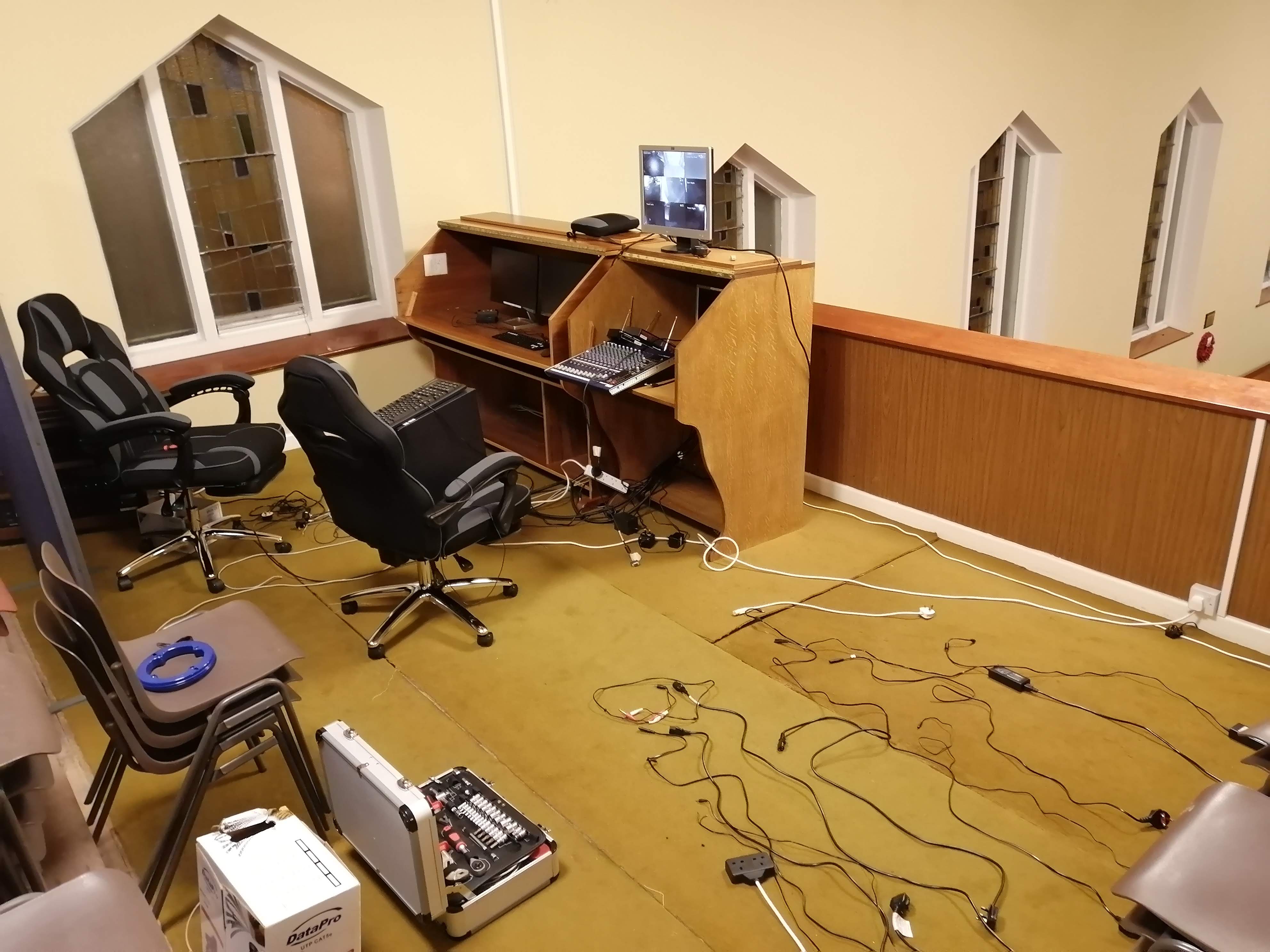 Whoah, we're halfway there! Equipment in the process of being re-wired on the desks 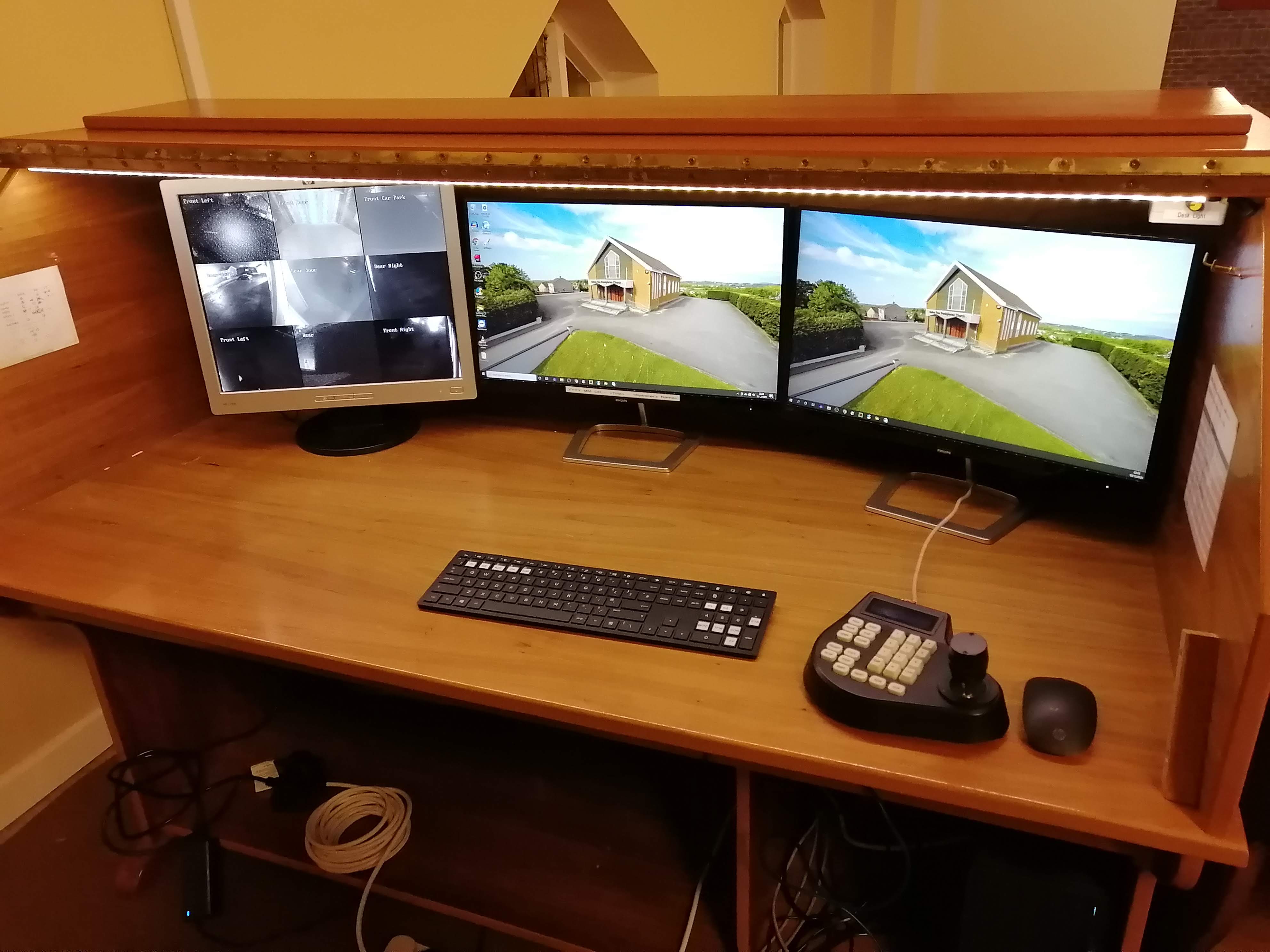 Finished product, for now, as of December 2020 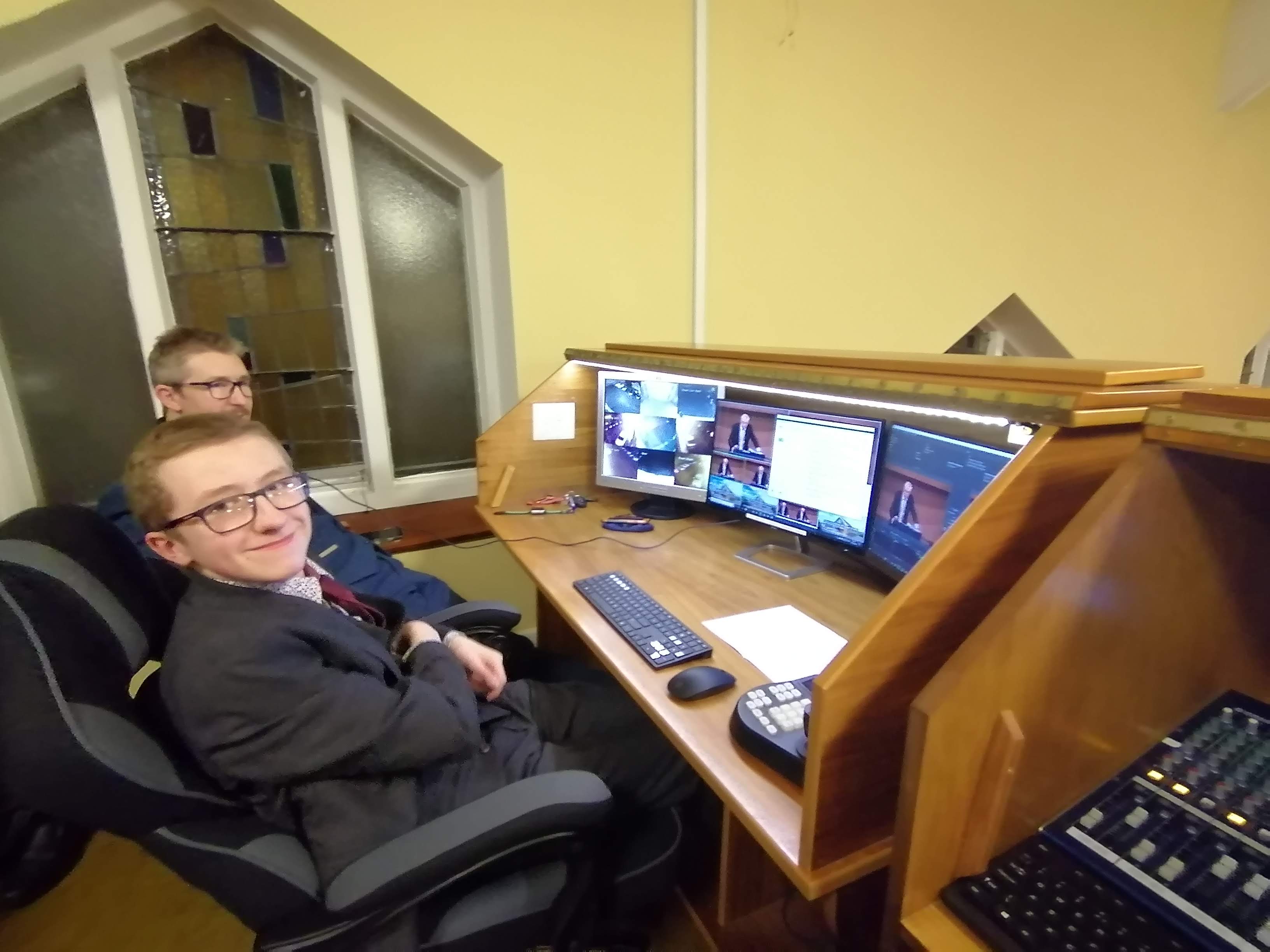 First use in anger! 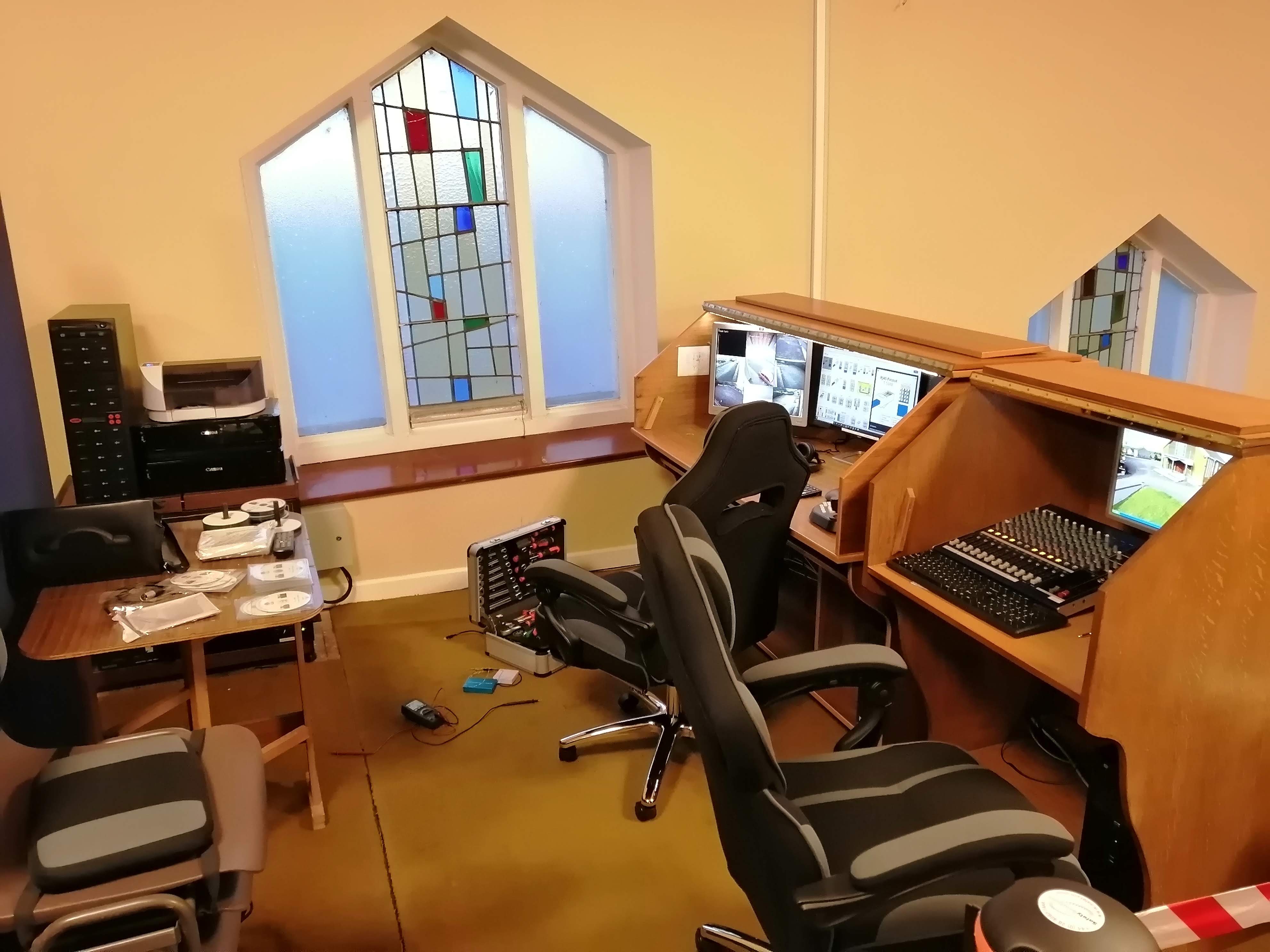 With everything working as expected, there was only one flaw with our plan: the lack of sockets. There was only one double socket within the vicinity of the new desk, and we had to run the entire system off a set of cascaded extension leads - not only a rather unsightly practice, but quite hazerdous! As such, we asked an electrician friend to install a new load of sockets for us. He decided to install a length of trunking inside each desk, which were then wired directly into the building's ring main. The only slighlty depressing fault with this brainwave was that we pretty much had to disassemble everything again! Well, not quite. Certainly a lot of the cables had to be moved into the new compartmented trunking, but we got away without completely removing all the kit again. My spark mate and I worked late for another two days to get that all sorted out. The sockets were wired in two seperate circuits - this allowed things like PCs to be plugged into a standard, permanently live socket, whilst monitors and audio kit were plugged into a bank of sockets that can be de-energised with a spur switch. This allows us to kill all the kit on the desk with a single switch, whilst leaving PCs etc safely powered on. 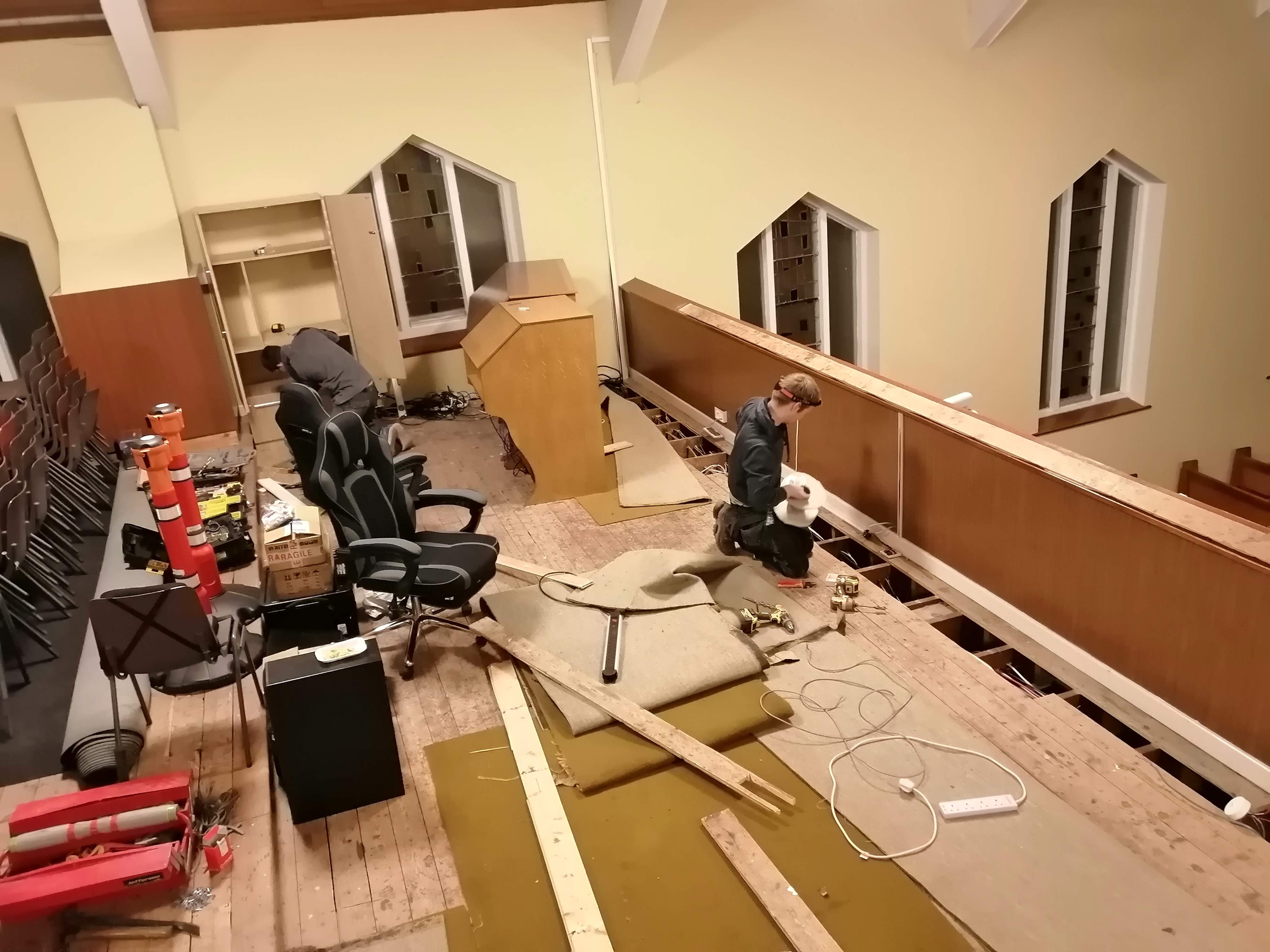 Almost completely dismantled again! The guys were hard at work here installing our purpose-built cupboard, and new mains circuits, whilst yours truly enjoyed a take-away dinner... 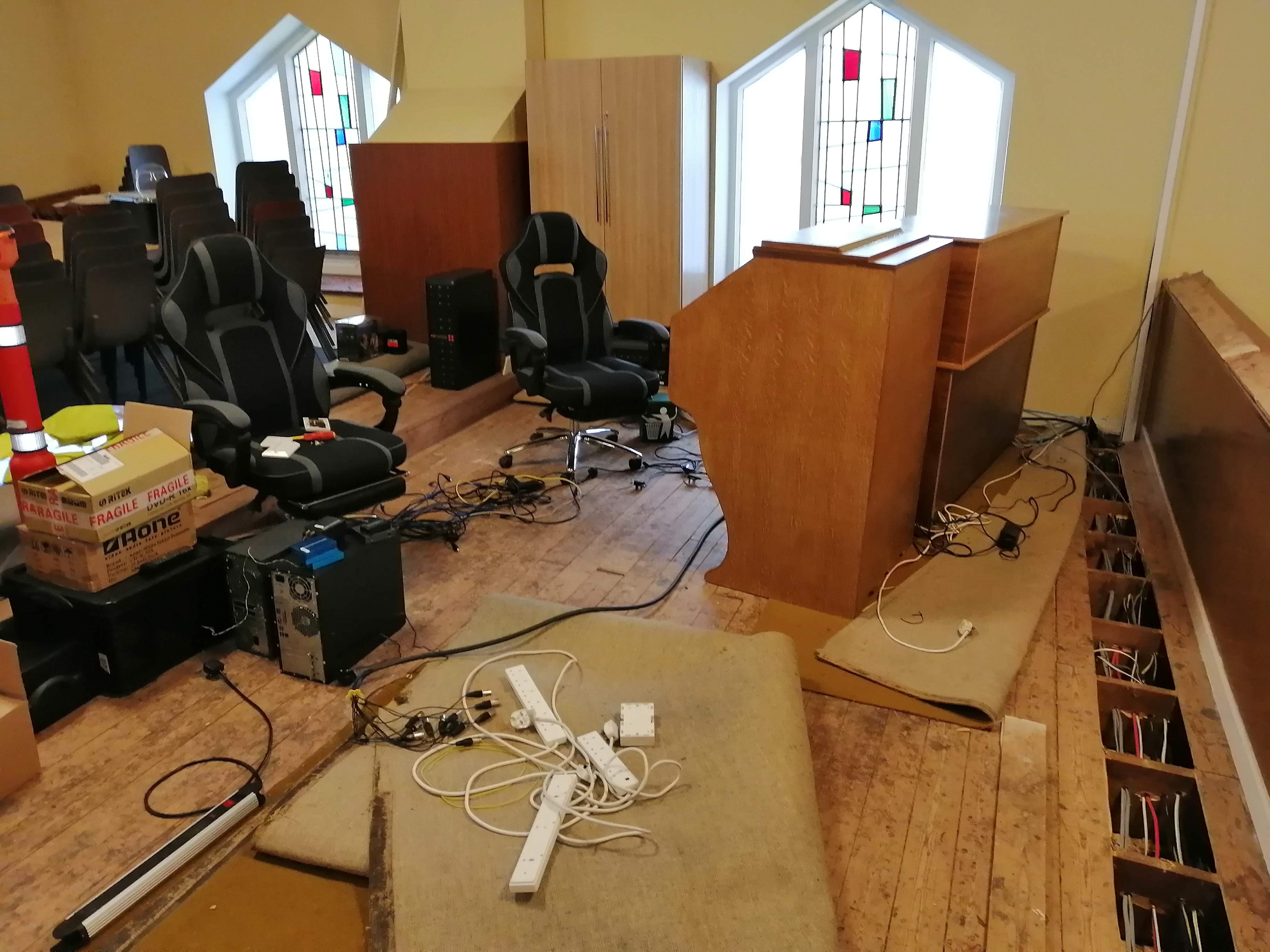 Getting there! (again)... You can see we had to pretty much start over for the nice trunking to be installed. It was definitely worth it in the end. 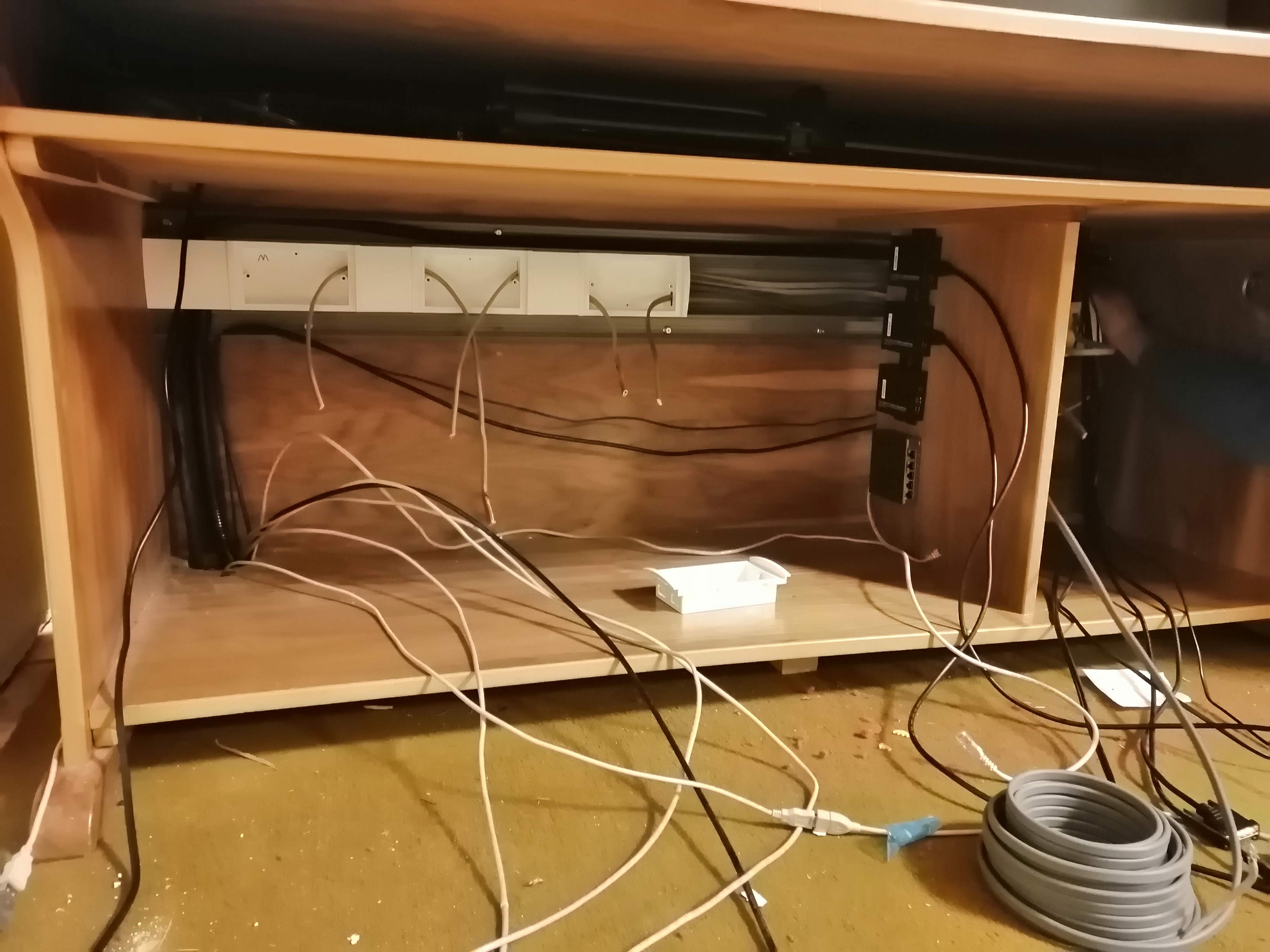 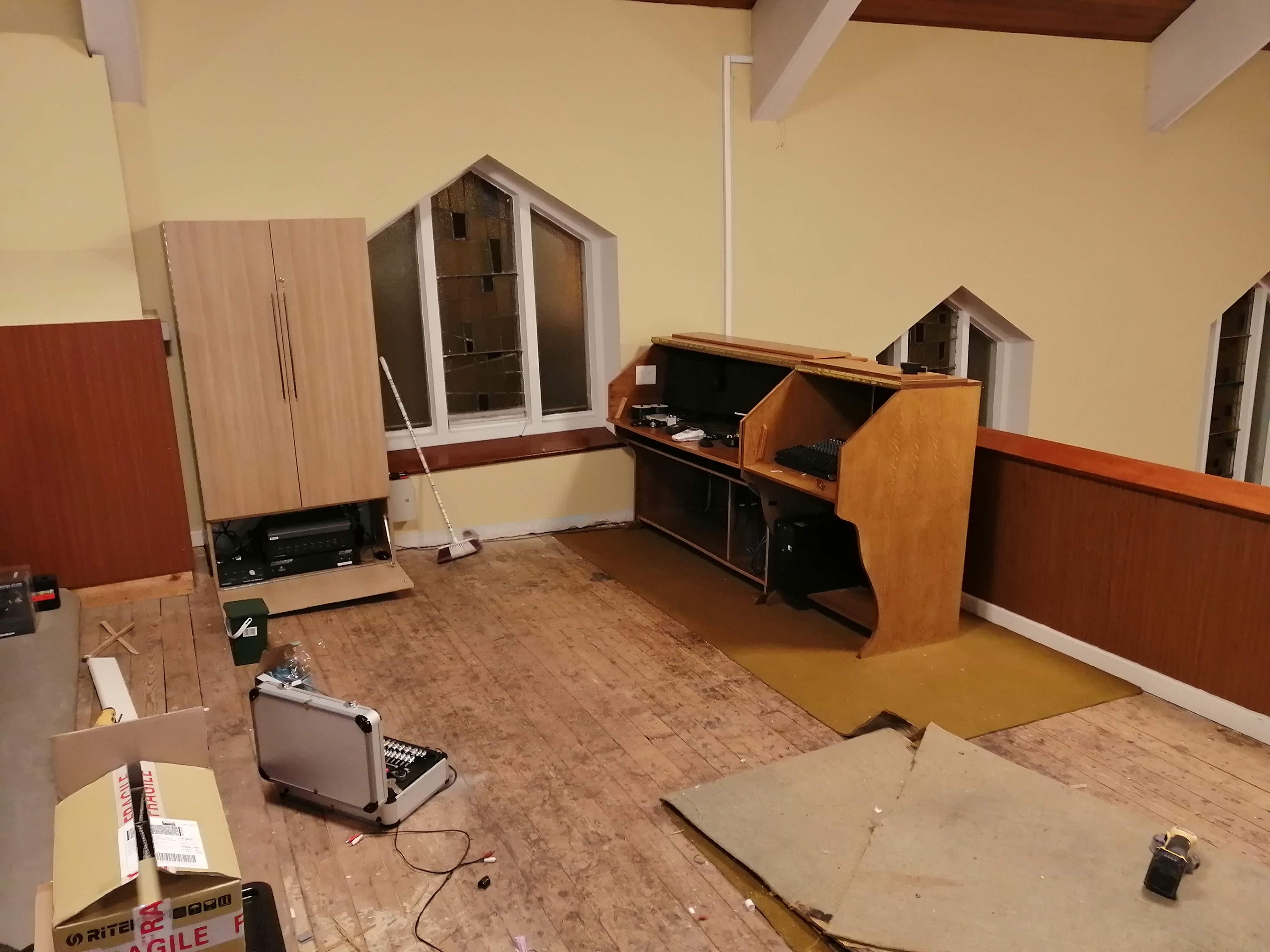 Nearly Done! Just a bit of carpet etc to sort out now. You may have noticed it's now dark outside - it was 11PM by this stage! 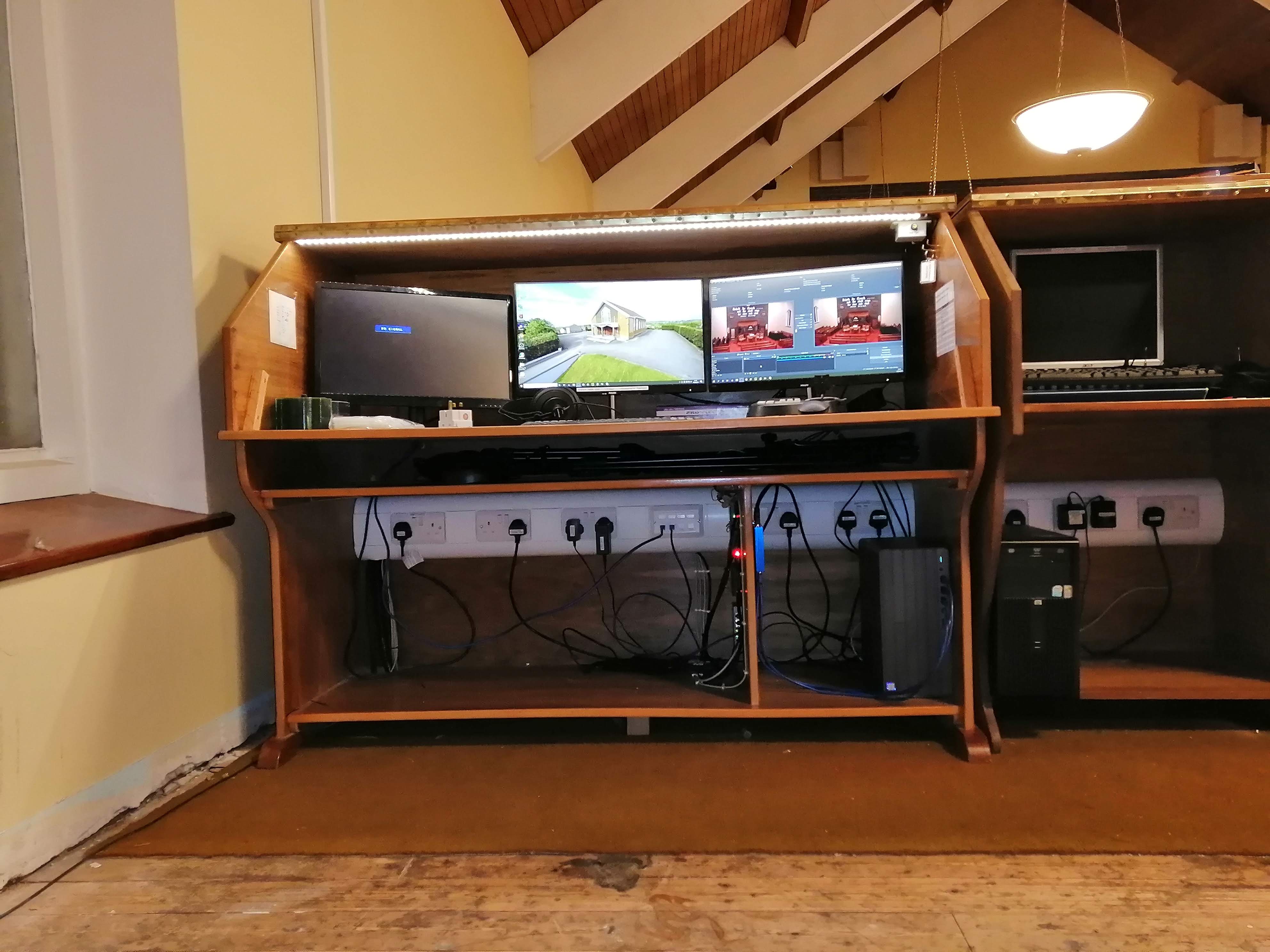 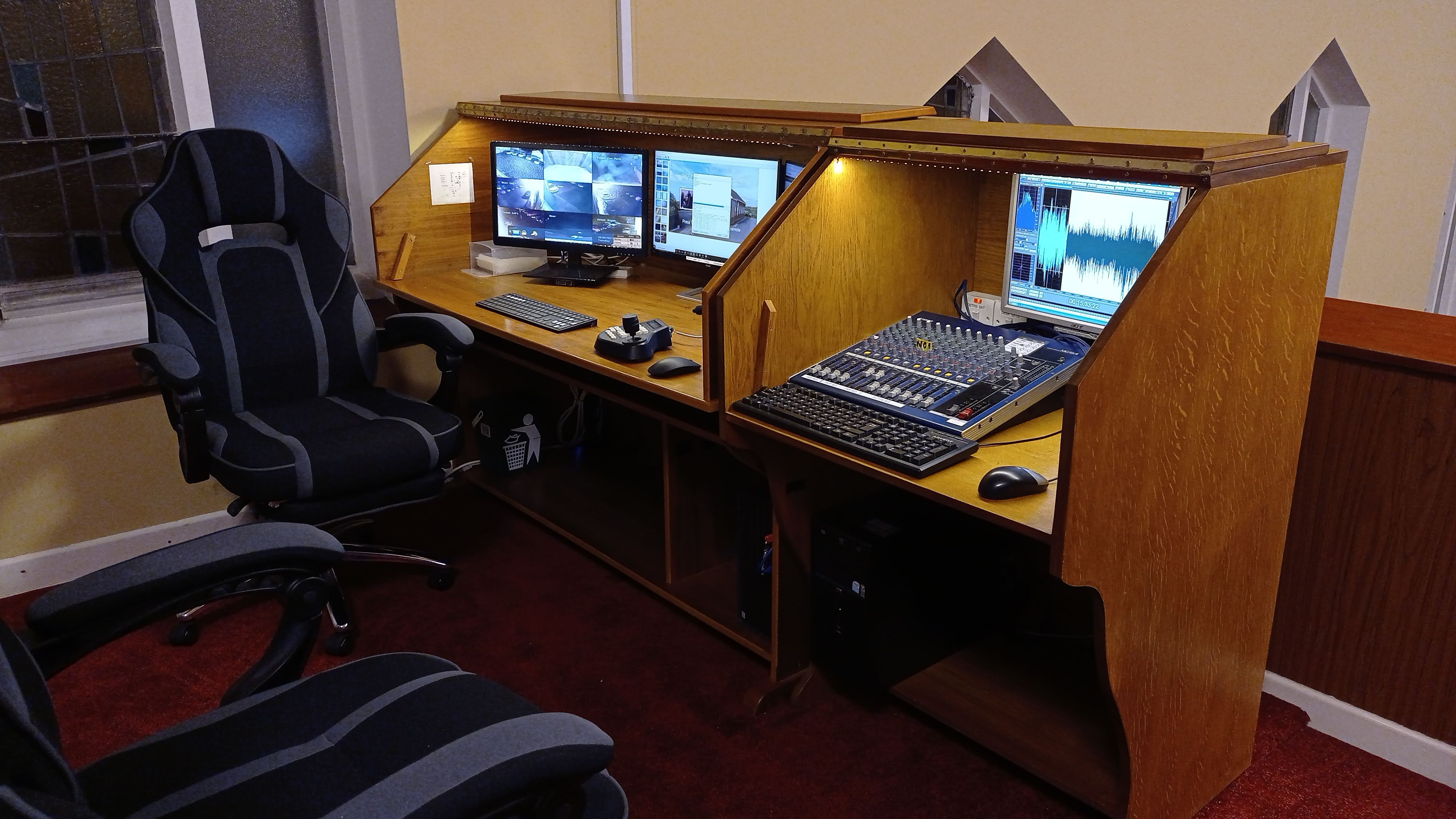